The Circle of… A Day In the… Final Four Words

Posted on 27 November 2016 by collinlieberg

The final four words of Netflix’s revival of the beloved TV show Gilmore Girls, which they subtitled A Year In the Life, are its creator Amy Sherman-Palladino’s culmination of the pop-cultural phenomenon.

Some fans are angry at them, almost demanding a second season in the reboot. As some fans noted, however, the words make perfect sense from the standpoint of the show. I lean more toward the latter interpretation.

Note, there are spoilers (and analysis) below. 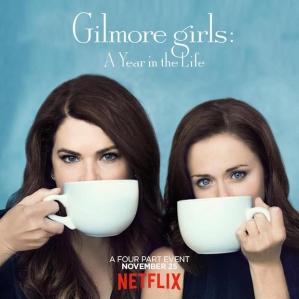 I really enjoyed the show when it originally aired. It was funny, quirky, endearing and heartwarming. I also appreciated all the pop culture references. I’d forgotten how much I missed the quick-fire banter and razor-witted characters. The first scene of the reboot — split into 4 parts, each named after the season of the year in which it takes place — recognised that as well. Rory (Alexis Bledel) and Lorelai (Lauren Graham) sit in the gazebo in their beloved Stars Hollow, drinking coffee (always!) and talking about just that. The show itself may have ended in 2007 but the actors slipped so easily back into their characters that there was no awkwardness. It just felt like eight years had passed in their lives, same as ours. The fact that the original creators, writers producers and show-runners Amy Sherman-Palladino and her husband David Palladino, were back for the revival, after leaving before the disappointing season 7, made the show feel like slipping on a familiar pair of jeans or well-worn sneakers.

I laughed at the jokes and references, I teared up at the appropriate times and overall I loved it. The second and third episodes, ‘Spring’ and ‘Summer’, dragged a little too much — especially the extended musical sequence — but I also felt that ‘Summer’ was the emotional heart of the revival. Yes, it was great to have the dedication to Edward Hermann — who had played Rory’s grandfather Richard in the original run and who died of cancer in 2014 — in ‘Winter’, and to see Luke (Scott Patterson) and Lorelai finally get married in ‘Fall’. It was nice to have Emily (Kelly Bishop) finally stop being such a stick-in-the-mud, overcome the loss of her husband of 50 years (though I did feel this storyline was a bit out of character, actually) and reconcile with her daughter (for good?). Those were all necessary and satisfying. But the real emotional conflict, and sentiment, came to a head in ‘Summer’.

Though Rory claimed she had plenty of ‘irons in the fire’ during ‘Winter’ and ‘Spring’, and in fact worked toward writing a deeper biography on someone whom she had profiled in a well-received New Yorker piece, by ‘Summer’ this has all fallen through. She’s finally moved back to Stars Hollow, even if she thinks she’s not ‘back’ for good, and is encouraged to join the Thirtysomething Gang, a group of similar-aged people who graduated, went to work and yet have moved back to live with their parents after getting chewed up by real life. Despite her best intentions and hard work, her journalism career is effectively dead. She’s forced to try writing a spec piece for GQ about lines — queues — in New York. When that doesn’t work she takes up the editorial pen of the Stars Hollow Gazette, an unpaid position. She’s broke, doesn’t have a car, a valid license, a paying job or, apparently, underwear. She also, finally, decides to end her affair with Logan, even despite the presence of Lorelai, meanwhile, will be saying goodbye to her longtime friend, concierge Michel, as he feels the need to move to a bigger, more modern inn. Lorelai is also on the committee overseeing Stars Hollow: The Musical, a musical retelling of the history of the town. While at a dress rehearsal with the others on the committee, the others are entranced despite (because of?) the utter banality of the songs, while Lorelai furiously scribbles critiques.

The two women are understandably distraught and petrified that so much around them is changing yet they seem stuck in neutral. It struck a chord with me. Friends from school and university have good jobs, are following their passions (and succeeding) and settling down with beloved children. Life is progressing as they dreamed (or at least society tells us we should dream). Yet for me, and Rory, this isn’t what has happened. Despite our best intentions, qualifications and work we haven’t been able to do what we want.

It is this episode that sets up the finale, including the final four words.

For the record, those are:

There have been numerous articles about the need to ‘talk about‘ these words, their ‘complications‘, why they might ‘make you angry‘ or if you ‘loved them‘.

They all point out how Logan is almost certainly the father, how he’s a proxy version of Christopher (Rory’s father, Lorelai’s ex), how Jess is her Luke (perhaps) and how the show has come full-circle. One even pointed out how different the context is had these been the final words of the original broadcast. 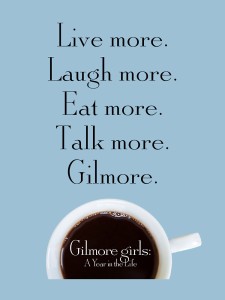 Back at the end of season 7 Rory was a recent Yale grad with dreams of being an international journalist and a job writing about the Obama campaign. In the revival she’s 32 (the same age as Lorelai at the start of the show), down on her luck and feeling lost. She’s no longer the precocious youth, but a seasoned woman. A very privileged, well-read woman who sometimes leads a fairy-tale Hollywood life, but a seasoned woman nonetheless.

Yet for as much sense and insight as the articles have, none talk about one of the other major issues. Everyone — outside of Jess, perhaps — has or will have a child. Children are the only measure of success. Michel and his partner Frederick are even adopting, and Michel hates children! What does it say about Rory’s feminism, ambition, writing skills or intelligence to be boiled down to her children? Yes, she is most definitely her mother’s child. But children don’t need to be the defining characteristic of someone’s life. There are plenty of people who can’t have or don’t want children who live full, productive and filling lives. Why aren’t they represented in the show? Why are children so important to someone’s self-worth?

The one good thing that could be said about the abysmal season 7 was that Rory rejected Logan’s proposal, went to follow her dream (and succeed!) and was a strong, independent, childless woman. While the show probably does end with the right words indicating the circle of life, or coming full circle or whatever cliché you want to use, it is still a sad comment by society.

Despite that critique, however, I felt the show ended well and doesn’t need a second revival. The stories have been told already in the original series. Stars Hollow supported Lorelai and helped her raise her child, that same cast of cooky characters will support Rory when she does the same.